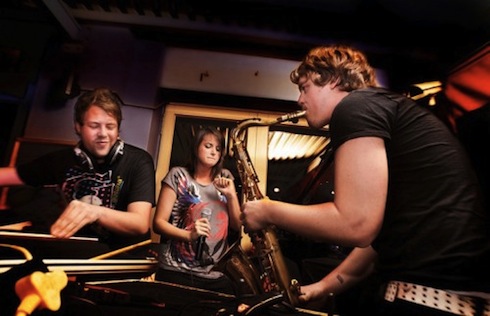 GoodLuck is an electro-swing and dance group from Cape Town, South Africa, consisting of Ben Peters and Juliet Harding. They produce a mix of jazzy melodies over a dance beat. Ben is the younger brother of Dom from Goldfish.

1. Goodluck is band that consists of 3 members they are not a rock band, their music is best described as pop-dance because of the lyrical content.

3. Goodluck got a residency at Karma in Camps Bay for 12 weeks that helped them to increase their fan base.

4. Parts of Goodluck enjoy the live-dance scene. Looking at groups like Basement Jaxx (not their DJ set, their live show). As well as Groove Armada, Daft Punk and Faithless. Generally inspired by people who manage to bring electronic music into a live format and make a success out of it.

5. Raiven a memember of the band has been studying jazz for 8-9 years, music doesn’t get sucked of your thumb you know.

6. Goodluck will be releasing an album in November.

7. Goodluck doesn’t master their own music, they feel that one shouldn’t be too close to their music.

8. “It’s what Miles Davis always used to say: “I’m a terrible trumpeter, I just surround myself with amazing musicians”. That’s what our secret is. Don’t ever get precious about your music. One of our most important rules is that the hero is the song. It’s never one of us, it’s never the band.”

9. Not only do they get to live in Cape Town and make music with some of the best talent South Africa has to offer but they’re also sponsored by the likes of Mini and Ray Ban which isn’t too shabby now is it?

10. The duo believe that it’s important to have sponsorship’s:

“It’s crucial,” Harding affirms. “Musicians are relying more and more on brands for support because artists don’t make money off album sales anymore. We wanted to pick brands that are aligned with what we represent though. I’d say don’t pull the ring out of it if you’re looking for sponsorship; you have to be true to your brand too for it to fit.”