They say necessity is the mother of invention. Well, I’m not sure if all of the following creations are necessary, but they certainly are Amazing! A bow to these creative geniuses and their contributions to our weird world.

Fashion in a can 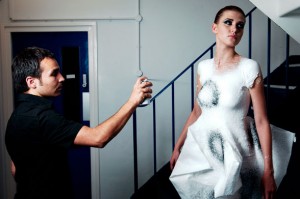 From its base in London, Fabrican technology has captured the imagination of designers, industry and the public around the world. The technology has been developed for use in household, industrial, personal and healthcare, decorative and fashion applications using aerosol cans or spray-guns, and will soon be found in products available everywhere! The original idea of spray-on fabric came from Manel Torres’ work in the fashion industry. This product captures the essence of science and fashion in collaboration. this spray-on fabric will liberate designers to create new and unique garments, offer a carrier technology for delivery of fragrance or even medical active substances, and allow the wearer to personalise their wardrobe in infinite combinations. New textures and material characteristics are a matter of adjusting chemistry Garments could incorporate fragrances, active substances, or conductive materials to interface with information technology. After a decade of research, this futuristic vision is taking shape. 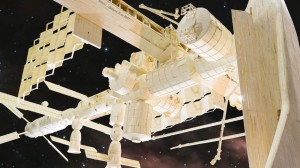 A 15 feet wide, 11 feet long and 4.6 feet tall model replica of the 150 billion dollar International Space Station has been created using just over 243,000 matchsticks. It took the artist—Patrick Acton—one entire year to build this mind-blowing piece of art and engineering! 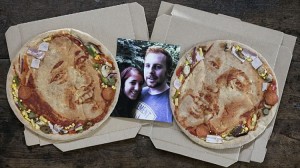 I can’t say that pizza isn’t an important part of my life, but this couple took their dedication to our favorite carb-loaded, cheese-covered meal to a new level. They made it part of their wedding! We order domino’s pizza all the time, so it felt right to incorporate them into the most special day of our lives. Artist Nathan Wyburn was hired by Dominos when bride and groom—Kieran & Natasha Morris—asked for pizza to be part of their January wedding.

This yummy food has finally validated its place in the romance isle! 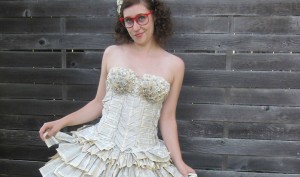 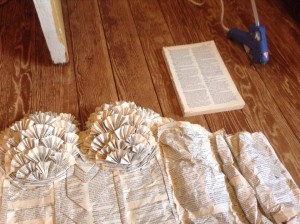 Jori picked up a used thesaurus at a thrift shop. Six months, and 2/3rd’s of the book later and she had a killer dress. As a voracious reader; Jori didn’t feel right tearing apart a novel, though she liked the idea of deconstructing a reference book. She mentions that she has to be very careful when wearing it because Just sitting down can cause a tear, not to mention the dress cannot be near fire or water. 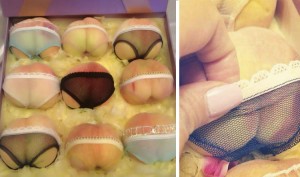 I’ll say what we have all been thinking: a fuzzy peach remarkably resembles a derriere. Recently, fruit vendors in China decided to capitalise on the anatomical similarity for a holiday.

The peaches are being sold in celebration of the Qixi Festival, which is a romantic Chinese holiday comparable to Valentine’s Day. A box of nine is going for approximately R848.84.

One fruit vendor is claiming he originated the idea. According SD China, the fruit seller says he submitted a panty peach patent a month ago and is filing for infringement claims for all the copycats.

What do you think? Should sexy peaches replace chocolates and flowers? 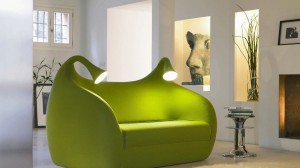 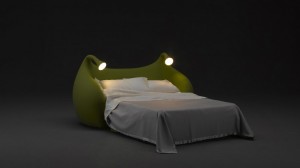 This couch by S. Giovannoni & R. Torre is called MORFEO and it’s made to look like a googly eyed alien where the lights are actually useful reading lamps! Not to mention it’s description by the makers is excellent: “He is the God of sleep reincarnated with two long, luminous antennas; cuddle up in his arms and you will have sweet dreams.”

BONUS: It works as a bed as well! 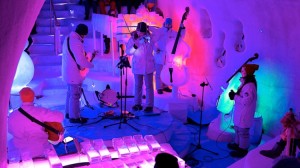 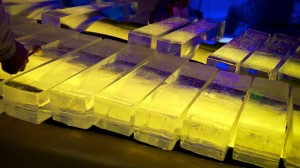 The following glowing  musical instruments are made out of ice!

The instruments are constructed almost completely by ice ranging from thick blocks on the xylophone to pieces that are just 3 millimeters thick!

BUT HOW DO YOU KEEP THEM FROM MELTING?

ICE Music has a whole list of instruments that they make and play which include the Violin, Viola, Cello, Contrabass, Banjo, Mandolin, Guitar, Drums, Xylophone and Rolandophone.

In California on Mohawk Street there’s a company making an already delicious fruit—Grapes—even better! The company called Grapery is something between a vineyard and laboratory where they make special grapes. Tweaking grapes and fruits in general is nothing new, but these particular Candy floss grapes taste exactly like the pink spun-sugar treat you loved as a kid at the circus!

So how do they do this?

Farmers make seedless fruits by grafting species together and growing old branches into new trees. Grapes that don’t make seeds are actually a genetic problem for the plants, hindering the ability to reproduce. But that happens to be good for eating; remember that next time you eat seedless grapes, which might just also taste like cotton candy or something even odder! Definitely on my to-do list! 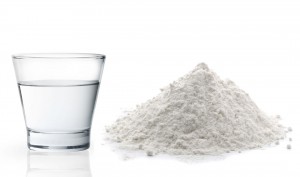 Palcohol is the new alcohol product that has actually been approved by the Alcohol and Tobacco Tax and Trade Bureau in the USA. It’s a powdered alcohol and all you need to do is just add water or sprinkle on you food and you have an instant buzz.

Mark Phillips created it after he identified a niche market. After a long hike he would want to curl up next to campfire and enjoy a refreshing cocktail. Only problem was he couldn’t fit a bulky bottle of booze in his backpack. Thus the birth of this party in a packet!One package and can fit into your pocket and each packet contains 10-12% alcohol by volume, which equals to roughly one drink.

Palcohol comes in either rum or vodka, and four flavors: Cosmopolitan; Mojito; Powderita-better known as a Margarita- and Lemon Drop, but apparently, this invention has gotten some negative press, so they added some FAQs to their site, including my favorite: Can I snort it?

Their stance on this issue is: NO! “You would feel a lot of pain for very little gain.”

The makers hope to have it in stores later this year… In America obviously and probably the next millennium for us Southerners. 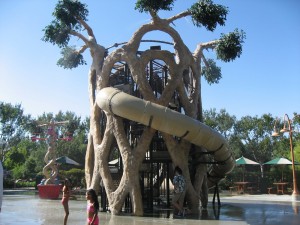 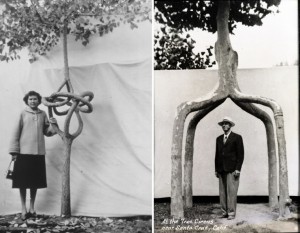 Axel Erlandson (1884-1964) was a Swedish born “tree shaper” who lived in California for most of his life.

Tree shaping is a method of growing trees into artistic designs, and Axel Erlandson was a master at it. He started shaping trees as a hobby in 1925, but his hobby soon became more serious after his wife and daughter suggested that tourists would pay to come see his strange trees.When asked how he made his trees grow, he replied, “I talk to them.”

Erlandson opened the Tree Circus in 1947 with transplanted trees from his personal garden. His creations were years in the making.One of his most recognizable trees, the Basket Tree, was made by plating 6 sycamores in a circle, then grafting them into diamond patterns.

Attendance to the Tree Circus was moderate. Construction of a new highway diverted tourists away from his roadside attraction. In 1963, Erlandson sold the Tree Circus for $12,000, although the trees were saved as National Landmarks and eventually bought by entrepreneur Michael Bonfante, who transplanted them to his new amusement park, Gilroy Gardens, which is where over half remain to this day.

The following constructions are the results of  vivid imaginations in the flesh. Feast your eyes! 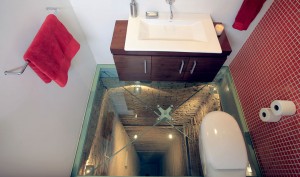 A luxury penthouse in Guadalajara, Mexico has a toilet suspended on a glass floor above a 15-story abandoned elevator shaft. It makes for an interesting view while you are doing your business! 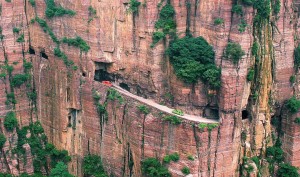 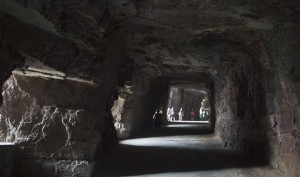 The only way previously to reach Guoliang Village in China was to take 720 steep steps. Unhappy with this arrangement, 14 villagers banded together and hand-chiseled a 4,100-ft-long tunnel that is 360 ft up a cliff face. No electricity or heavy machinery was used; it took 5 years to construct; about 10 tons of drill rods were used and it went through 4,000 hammers. 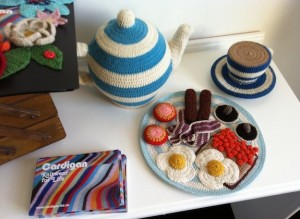 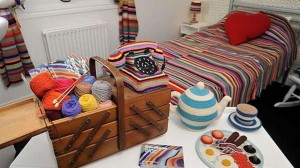 The Hotel Pelirocco in Brighton, England has a room where EVERYTHING is made from wool, including: vase of flowers, curtains, toothbrush and even toothpaste. Kate Jenkins made it using 5kg of wool. She also crocheted the bedspread, and covers for the phone, lampshade, teapot and cup. 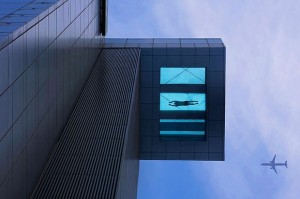 The glass-bottomed pool at a Holiday Inn in Shanghai, China hangs over a 24-story drop, and lets swimmers peer to the street below while they are taking a dip. 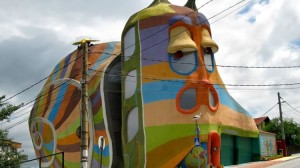 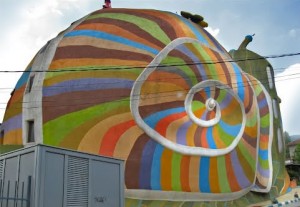 A five-story house in Bulgaria was designed to look like a giant snail! 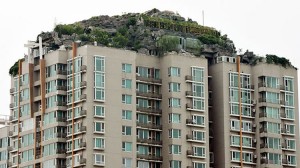 Eccentric millionaire doctor, Zhang Biqing, from Bejing, decided to build an elaborate private mountain on the top of his 26-story building.The rooftop villa is beautiful and it has taken over 6 years to build. The mountain garden has trees, rocks, grass, and could rival any private getaway. It’s a nice little piece of the country atop an urban cityscape.

Unfortunately, Biqing failed to get the proper paperwork and permits before he built his massive structure. Not only that, the six years of constant construction did not please his downstairs neighbors and after numerous complaints, the local authorities finally issued Mr. Biqing with a warning.

He has 15 days to remove the mountain or else it will face forcible removal. Shame.

There’s no limit to the weird wonders you’ll find when you wander through the net!