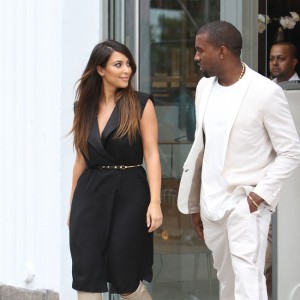 Kanye West praised the Kardashian family as “the most remarkable people of our time” during one of several lengthy speeches at his wedding to Kim Kardashian in Florence, Italy on Saturday (24.05.14).

Kanye West thinks the Kardashian family are “the most remarkable people of our time.”

The ‘New Slaves’ hitmaker gushed about his new wife, Kim Kardashian, and her famous family during several lengthy speeches at their wedding at the Forte di Belvedere in Florence, Italy on Saturday (24.05.14).

During one 20-minute “public warfare” rant, the opinionated rapper talked about the perks of pitfalls of their celebrity status, saying: “They feel like it’s okay to put you on the tabloid covers to sell your image, to use you in an ‘SNL’ (‘Saturday Night Live’) spoof. We don’t negotiate. We’re not like that. We’re not stupid.

“The Kardashians are an industry!

“At this table…the combination of powers…can make the world a better place.  The most remarkable people of our time.”

An insider told UsMagazine.com that the couple’s 200 guests weren’t surprised by Kanye’s decision to speak several times, adding: “We all knew those would be coming. It would have been disappointing if it didn’t happen.”

The ‘Blood On The Leaves’ hitmaker also repeatedly praised his “beautiful” bride, calling her “the ideal celebrity… the ideal art,” and said he was looking forward to “spending every day of my life with Kim.”

The couple, who have 11-month-old daughter North, partied until 2.30am after tying the knot in front of a wall of flowers at sunset.

“[The ceremony] was beautiful. Absolutely magnificent. The music was perfect – Kanye was very happy!”