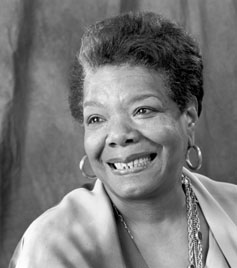 Maya Angelou, the groundbreaking poet and author who wrote I Know Why the Caged Bird Sings, is dead at 86.
According to reports, a caretaker found her dead at her home in Winston-Salem, North Carolina, on Wednesday morning.
A police car, ambulance and a hearse were seen outside her home by 8.30am on Wednesday. The Mayor of Winston-Salem confirmed that the renowned writer had died.
Angelou had been struggling with health problems in recent weeks and had recently cancelled a May 30 appearance at the 2014 MLB Beacon Award Luncheon in Houston, where she was to be honoured with the ‘Beacon Life Award.

The civil rights icon blamed her failing health for missing the event.
She remained active, even as her health began to deteriorate. On May 23, five days before her death, she tweeted, ‘Listen to yourself and in that quietude you might hear the voice of God.’
Angelou has been celebrated as one of the greatest writers of her generation, bringing light to the struggles of women and African Americans — as well as the human condition, writ large
She was the first African American woman to be honoured with a Pulitzer Prize and had received countless other accolades for her work since that time. 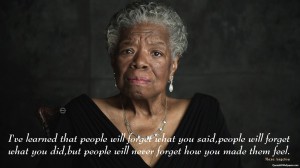