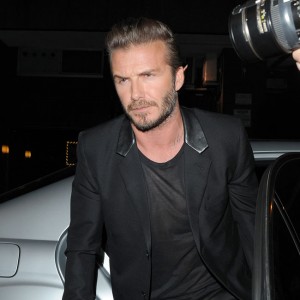 The former soccer player and underwear model, who has launched his first collection of swimming trunks for the high street brand, has revealed Sean Connery in the first ever Bond film of 1962 inspired him to create the new line.

He told Shortlist magazine: “Sean Connery in ‘Dr. No’ was definitely on the reference board when we started. Old bond movies were a big reference.

“I have a great relationship with H&M and we’re always looking for something else we can be successful in.

“The bodywear range has been great since the launch in 2012, so when the swimwear idea came up, we were all over it. The board shorts are something I think will go down well – everyone likes a comfortable pair of shorts. Not everybody likes the tight ones.”

The 39-year-old hunk admits wearing tiny swimming trunks is a “huge step” for any man but he thinks they should just embrace them.

He said: “Sometimes you’ve got to just do it, and not worry about what anyone else thinks. That’s what I felt when I first wore a pair that were small and tight. I thought, ‘You know what? I’m on holiday, I’m tanned … so?”

David, who has children Brooklyn, 15, Romeo, 11, Cruz, nine, and two-year-old daughter Harper with his wife Victoria, has made sure board shorts are a big part of the collection.

Asked if he’s a fan of surfing, he revealed: “I’ve never been allowed to surf. My kids do it, but I wasn’t allowed to do water sports at all while I was playing. I could do it now, but I wont, like, I’m slightly worried about sharks. I have tried it a couple of times though.”