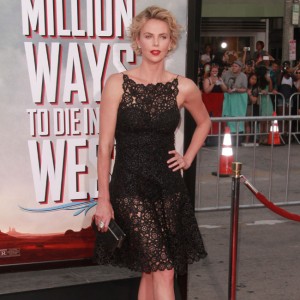 Charlize Theron thought she was going to die on the New Mexico set of ‘A Million Ways to Die in the West’ because it was so hot that one day the road started to melt.

Charlize Theron thought she was going to die on the set of ‘A Million Ways to Die in the West’.

The 38-year-old actress stars as the wife of a notorious gun-slinger in the comedy-western and while she was filming in the New Mexican desert the temperatures were so high she didn’t think she would survive.

Quizzed on what it was like to film in the state, she told Collider.com: “It’s a gorgeous place … but I wouldn’t necessarily want to go and shoot in it again.

“The weather was just unbelievable. I felt like it was Biblical times and we were all going to die a horrible death by weather.”

Writer-director Seth MacFarlane, 40, acts alongside the ‘Snow White and the Huntsman’ star in the film and takes on the role of a cowardly farmer who begins to fall for her character when she teaches him how to shoot a gun and stand up for himself.

Theron admits that one day, when they’d finished shooting, MacFarlane sent her a message to warn her to leave the set as soon as possible because the heat was melting the road.

She added: “There was a night where we shot, and Seth left before me, and I got a text from him that literally just said, ‘The road is washing away. Get out of your trailer right now and start driving.’