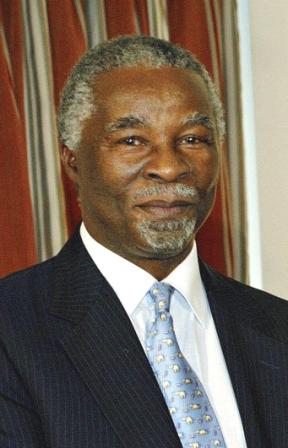 2.  Thabo Mbeki was born and raised in Mbewuleni, Cape Province, Union of South Africa, Mbeki is one of four children of Epainette and Govan Mbeki

3.  Thabo Mbeki’s father was a stalwart of the African National Congress (ANC) and the South African Communist Party

4.  Thabo Mbeki’s parents were both teachers and activists in a rural area of ANC strength, and Mbeki describes himself as “born into the struggle”

5.  He is also the brother of Moeletsi Mbeki.

6.  Thabo Mbeki was also involved in mobilising students in support of the ANC call for a stay at home to be held in protest of South Africa’s becoming a republic.

7.  In 1966, Mbeki appealed to Oliver Tambo to allow any South African student who supported the ANC to be admitted into the movement’s Youth and Students Section (YSS), irrespective of race. Tambo agreed and the YSS became the first non-racial arm of the ANC. In the same year, the ANC upheld its decision to exclude non-Africans from its National Executive meeting in Dar-es Salaam

8.  Thabo Mbeki and several Africans were now included in the South African Communist Party’s (SACP’s) Central committee, including Chris Hani. Both Hani and Mbeki celebrated their 28th birthdays at this meeting, making them the youngest members to ever serve on the committee

9.  In December 1961, Mbeki was elected secretary of the African Students’ Association. In the following year, he left South Africa on instructions of the ANC.

10.  Mbeki married his wife Zanele (née Dlamini) at Farnham Castle in the United Kingdom in 1974

11.  Thabo Mbeki was the executive face of government in South Africa from 1994. During his time in office the economy grew at an average rate of 4.5% per year. Mbeki created employment in the middle sectors of the economy and oversaw a fast-growing black middle class with the implementation of Black Economic Empowerment (BEE)

12.  Thabo Mbeki has received worldwide criticism for his AIDS stance. He questions the link between viruses and AIDS and believes that the correlation between poverty and the AIDS rate in Africa was a challenge to the viral theory of AIDS. His fate was not helped by Health Minister Manto Tshabalala-Msimang and the overhaul of the pharmaceutical industry in South Africa

13.  In 2005 Thabo Mbeki removed Jacob Zuma from his post as Deputy President of South Africa, after Zuma was implicated in a corruption scandal. In October 2005, some supporters of Zuma (who remained deputy president of the ANC) burned T-shirts portraying Mbeki’s picture at a protest. In late 2005, Zuma faced new rape charges, which dimmed his political prospects. There was visible split between Zuma’s supporters and Mbeki’s allies in the ANC

14.  Thabo Mbeki received the Newsmaker of the year award from Pretoria News Press Association in 2000 and repeated the honour in 2008, this time under the auspices of media research company Monitoring South Africa. In honour of his commitment to democracy in the new South Africa, Mbeki was awarded the Oliver Tambo/Johnny Makatini Freedom Award in 2000. Mbeki was awarded the Peace and Reconciliation Award at the Gandhi Awards for Reconciliation in Durban in 2003

15.  Thabo Mbeki has been a powerful figure in African politics, positioning South Africa as a regional power broker and promoting the idea that African political conflicts should be solved by Africans

16.  In 2004 the Archbishop Emeritus of Cape Town, Desmond Tutu, criticised President Mbeki for surrounding himself with “yes-men”, not doing enough to improve the position of the poor and for promoting economic policies that only benefited a small black elite. He also accused Mbeki and the ANC of suppressing public debate. Mbeki responded that Tutu had never been an ANC member and defended the debates that took place within ANC branches and other public forums

17.  Thabo Mbeki, although barred by the Constitution of South Africa from seeking a third term as president of the country, in 2007 entered the race to be President of the ANC (no term limit exists for the position of ANC president), for a third term, in a close battle with Jacob Zuma. He lost this vote against Jacob Zuma on 18 December 2007 at the ANC conference in Polokwane. Zuma went on to be the ANC’s presidential candidate in the 2009 general election

18.  Thabo Mbeki  formally announced his resignation on 21 September 2008, at 19:30 South African time (17:30 UTC), as a result of the ANC National Executive Committee’s decision no longer to support him in parliament

20.  In 2006, Thabo Mbeki was awarded the Presidential Award for his outstanding service to economic growth and investor confidence in South Africa and Africa and for his role in the international arena by the South African Chambers of Commerce and Industry. In 2007 Mbeki was awarded the Confederation of African Football’s Order of Merit for his contribution to football on the continent

21.  Thabo Mvuyelwa Mbekiis a South African politician who served nine years as the second post-apartheid President of South Africa from 14 June 1999to 24 September 2008

22.  Mbeki announced his resignation after being recalled by the African National Congress’s National Executive Committee, following a conclusion by Judge Nicholson of improper interference in the National Prosecuting Authority (NPA), including the prosecution of Jacob Zuma for corruption

23.  The Thabo Mbeki Foundation (“the Foundation”) is a non-profit organization that was launched by former President Thabo Mbeki when he ended his service to the South African Government in 2008.The aim of the Foundation is to support efforts aimed at promoting the achievement of Africa’s Renaissance by setting the agenda for progressive change throughout the Continent.

24.  He became a vocal leader of the Non-Aligned Movement in the United Nations and while leveraging South Africa’s seat on the Security Council